When Beverly Joubert woke up riding a buffalo, she thought she was having a strange dream. But very quickly, she says, “it actually hit me that I was.” In fact, the wildlife photographer was accused and charged by a male buffalo. She realized that she was rushing through the swamps of Botswana, her body piercing the animal’s horn and carrying it. My body was like a cloth doll, floundering on top of it. I was probably conscious of about three enemies. I remember a silent plea for help. I kind of lived in my head – I think we’re all in survival mode – and then I fainted again.

It was 2017 and Joubert, 65, a native of South Africa, was working on a wildlife documentary series for National Geographic International and PBS. The shooting took place in the Okavango Delta, a two-million-hectare labyrinth of rivers in Botswana, South Africa. The last photo I took that day was of a hippopotamus throwing itself out of the water. “It was really a huge screen, more than usual.” When the sun went down, Joubert packed her camera and headed back to camp in the dark.

She was there with her husband and aide Derek. The couple has known each other since they were teenagers. They’ve worked in a game lodge, become National Geographic explorers, and are two of the world’s top wildlife filmmakers — with over 40 films and eight Emmy Awards under their belts. In the 1980s, the Jouberts made their first trip to Botswana and knew right away that it was where they wanted to live. We were desperately in love – with each other, yes! – but also with that real wilderness. 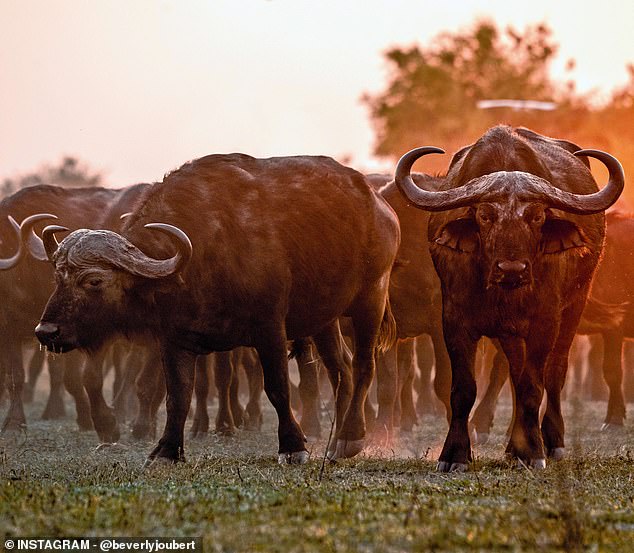 Male Buffalo accused wildlife filmmaker Beverly Joubert and signed her. She remembers her body like a cloth doll, and asks for silent help

The buffalo attack occurred on March 3, World Wildlife Day, and unfortunately, it was Derek’s 61st birthday. To his surprise, Joubert planned a candlelit dinner in the camp’s main outdoor area. After 35 years in the Okavango, they knew the journey from the tents all too well – they’ve made it countless times.

But when they turned down the track, something was different. “We heard from the darkness this amazing buffalo grunt,” says Joubert. They looked and saw an angry buffalo heading towards them. Up close, these animals are enormous—one buffalo can weigh up to 1,000 pounds and stand six feet tall, with horns more than four feet long. The buffalo glimpsed for less than three seconds: “I remember going, ‘Oh no,’ but I’m thinking, ‘Stand as steady as you can, you won’t hurt him, he’ll pass past. ”

The problem was that the buffalo was injured. There was a large wound on his side. Perhaps because of a human spear or an animal horn. He was fighting for his survival. Maybe they saw us as demons. Perhaps it was humans who hit him. Who do you know?’ 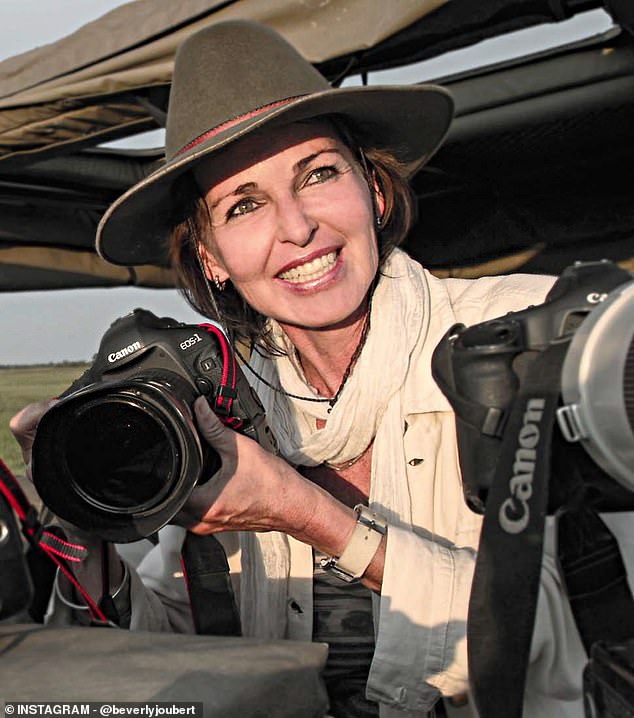 Beverly Joubert (pictured) has photographed the wildlife of the Okavango for four decades. It took seven surgeons five days of back-to-back operations, 22 sutures and 41 screws to get them back into shape.

Either way, the animal was sad. It crashed into Derek first, forcing him to skate down the road and crack his hip and ribs, then thrust his horn through Joubert. The curved horn went under her armpit, through her chest, to her neck and cheek, and stopped near her optic nerve. Her lung was punctured, her collarbones were broken, her throat was torn, her eyes collapsed, and her cheekbones cracked in 21 places.

Joubert concussed on impact, and the creature fled with her into the night. There was no full moon that evening, says Joubert, and it was hard to see what was going on. “But as Derek was lying on the ground, he could see from the silhouette that I was on the buffalo.” He manages to get up (“that golden hour of adrenaline”) and chase the animal, giving him a powerful kick in the side. “Buffalo, obviously, was upset,” but Derek’s strategy worked; The creature rotated its head and took out Joubert to clean its horn.

I thought, “I’m not going to survive. I want to be conscious to say goodbye.”

By the time she woke up, Derek was swinging back into camp, trying to hold her and walking with his broken thigh. I remember saying, “Derek what are you doing? Don’t take me. I can walk.” I exposed my body and walked. Blood was running down her face and her bones were broken, but she went on her way. It’s funny how the mind works. Maybe it’s just because I’m strong-willed. But I knew I was alive, so I had to be fine.

However, the night was hellish. As the couple waited in the dark for the airlift to arrive, Derek supplied Joubert with painkillers and water. But her pain and blood loss did not subside. In the end, Derek had to wrap his hand in a bandage and put it in the wound under Joubert’s armpit in an attempt to stop the bleeding. Once, she vomited blood in a bucket, revealing that her bleeding was internal as well.

“I got to the point after midnight where I saw that blood in the bucket and thought, ‘Maybe I won’t make it; I need to prepare Derek. ”She asked him to stop giving her painkillers but he refused. I said, “No Derek, you don’t understand. This could be fatal and I want to be fully conscious when I say goodbye.”

That was a very difficult moment. I didn’t want to die, but I was looking at reality and I wanted it to be on my own terms. Not kicking or yelling. That night Joubert died twice. Both times Derek revived her.

After 11 hours of waiting, a plane arrived and 18 hours later Jaubert was on the operating table at Millpark Hospital in Johannesburg. It took seven surgeons five days of back-to-back operations, 22 sutures and 41 screws to get her back into shape. After that, she couldn’t talk, eat, or even close her eyes. For three months she was fed through her bowl. The collarbone was replaced with a large artificial plate. 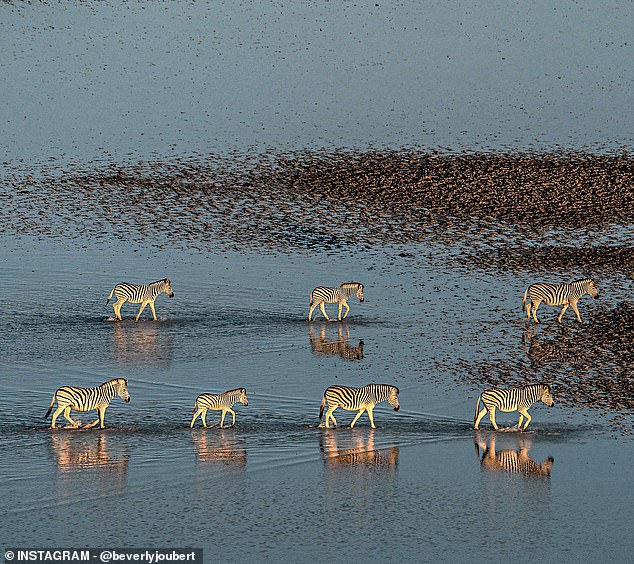 But Joubert was determined to get better – mostly because she didn’t want to give up on her restoration and film projects. In her hospital bed, she dreamed of an Okavango and the animals she encountered there. These were exceptional lionesses, leopards, captured underwater items. I think this was my lifeline.

Finally, after three months, I was discharged from the hospital. When she left the hospital, Joubert’s doctor told her, “You know, you shouldn’t have survived.”

The accident did not prevent her from working with animals. Today, Joubert is still based in Africa, where he makes films, takes photos, and works in conservation. Her most recent project was Prints for Wild Life – a photography sale that raises money for national parks in Africa.

It’s an important job. In the past 50 years, the African lion population has decreased from 450 thousand to less than 15 thousand. Cheetahs number about 7,000 and only 3,000 black rhinos are left on the continent. But, says Joubert, we must not give up. In fact, she uses her accident “as a symbol of what’s happening to our planet: we can all change it if we’re committed.”

In October 2017, seven months after facing the buffalo, Jouberts returned to Botswana. “Everyone wanted to treat me with baby gloves, and I said, ‘No, no, I have to go visit,'” says Jaubert. “So she went back to the exact spot that was attacked and sat down with a herd of buffaloes. She pulled out her camera and started taking pictures of the animals. She specifically wanted depicting their horns.

“I had to make peace with the buffalo,” she explains. “You have to make peace, you don’t want to be a victim.”

The truth is that Joubert has been reconciling with the buffalo since the night one of them attacked them. Derek remembers her saying at the time that they needed to kill the buffalo that had infected her. Joubert, who was drowning in consciousness and lost him, came and said, “Please don’t kill the buffalo, it wasn’t his fault.” Perhaps her affection for animals stems from her family (her mother has 19 cats), or perhaps it is the result of her lifelong work in conservation.

Either way, don’t blame the buffalo that nearly killed her.

Animals have no morals.