After a good, sweaty workout, we all crave a nice cold drink to quench our thirst.

Water is always the preferred choice, although to replace lost electrolytes, some prefer sports drinks.

Whatever you choose to drink, hydration is key to exercise to recovery.

However, it is equally important to drink before and during exercise, not just when your throat is dry after exercise.

And extravagance is not the correct way to re-hydration. Instead, you need to keep sipping on fluids throughout your workout.

This makes transporting water and drinking more convenient as they don’t have to stop or slow down to take a sip.

They use a tube (such as a straw) attached to a bag or water tank and drink.

For marathon runners, water hydration stations are set up every 5 kilometers during the races.

Imagine that you are dehydrated and you are given fluids intravenously – the doctor is not pumping you large amounts of fluid at once, but dripping it little by little.

If you haven’t hydrated well during the day, you may find yourself disoriented, confused, or have a headache while exercising.

No matter how many liters of fluid you are taking in at that moment, it will not relieve your symptoms right away.

It is best to head home, hydrate slowly and rest.

The easiest way to check the hydration status is to note the color of your urine – if it is pale yellow and flows well, you are sufficiently hydrated.

If your urine is dark yellow and you don’t pee often, you are probably dehydrated.

Keep in mind that dark yellow urination can also be caused by taking some vitamin pills and is not a concern if you are urinating normally. 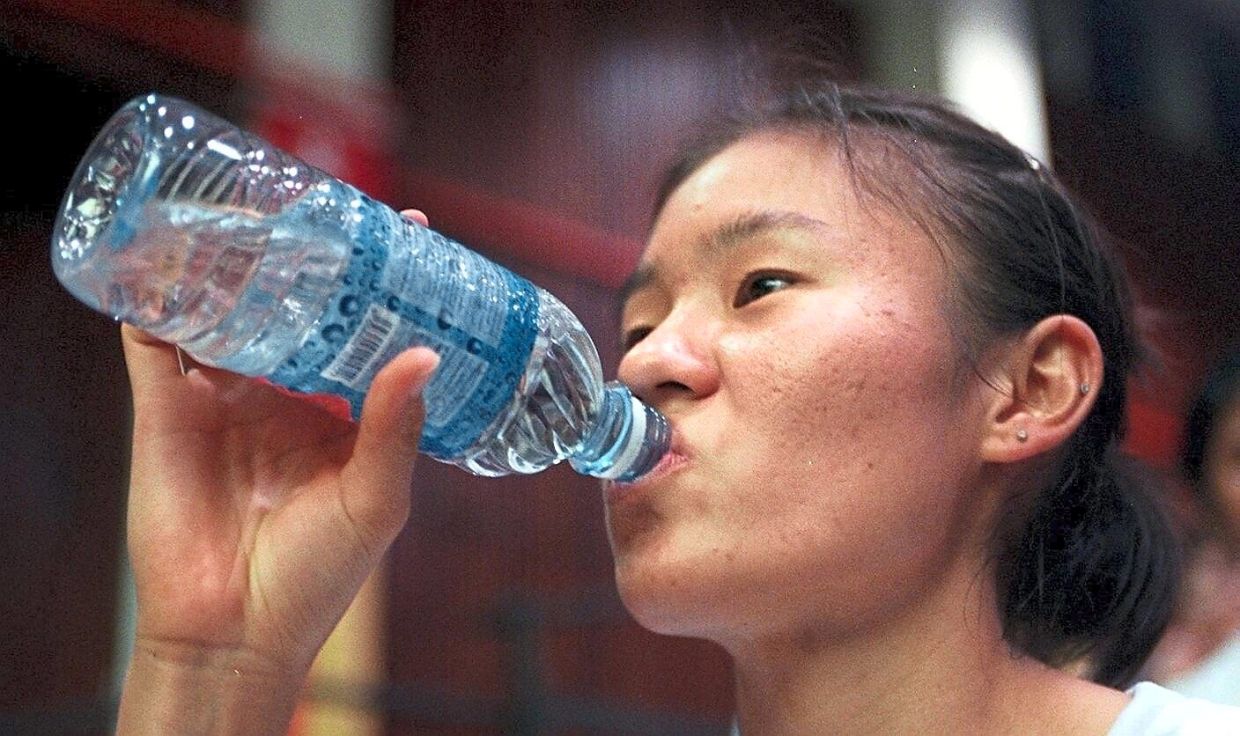 Obviously, water is the best option to replace lost fluids.

You read that right, you have to plan how to hydrate, especially in long workouts.

The average person loses up to a pint of sweat per 30 minutes of exercise, depending on its intensity, and this fluid needs to be replenished.

When I (used) to walk long distances, I wouldn’t carry a bottle of water, thinking my two hour workout would be over quickly and I could go to the store for fresh coconut water afterwards.

Furthermore, I wanted free arms and didn’t like the idea of ​​pulling a water bottle in my hand or backpack.

Then one day the two of us were hiking on a nearby trail and my friend started feeling faint.

She usually walks on an empty stomach, and I think the hot, humid day, combined with the fact that her glucose level might have gone down, made her feel weak.

There were a lot of people in the woods, so we couldn’t move fast enough to get out.

I emptied her little water bottle and had nothing to offer.

Seeing us on the ground, other hikers came to our rescue quickly and fed her chocolate and water.

One of them poured cold water over her head to lower her body temperature and advised us to always carry a large water bottle in the future, as a short trip can be long, even fatal.

Therefore, not only do you need water to stay hydrated, but it is also helpful to spray yourself to cool off.

We rested a bit and were able to get out safely.

After that episode, I never leave the house without a bottle of water, a malt candy, a nut bar, a mini-Angin, an umbrella and, most recently, hand sanitizer or alcohol wipes.

In the West, there are water fountains installed in most gardens, but we do not have such a thing here.

Even if we did, we might see the ugly side of Malaysians with the fountain likely to be vandalized, spit out, or improperly maintained by our local councils.

Post-workout coffee is a hot debate in the fitness and science world, but it appears that coffee can help the body recover.

If your glycogen levels are depleted, you will feel muscle soreness and fatigue from exercise.

Study in the journal 2021 Nutrients Coffee with adequate amounts of carbohydrates was found to increase muscle glycogen resynthesis during the four-hour recovery period after intense cycling exercise.

Some people swear by iced coffee after a workout, saying it gives them a boost.

However, right after your workout, you should drink water first before having a cup of coffee.

As long as you prioritize hydration such as water and electrolyte drinks, and use coffee as an additional ingredient, coffee can be part of an effective post-workout recovery strategy.

Before a workout, if you really need that coffee, drink it at least an hour before you exercise.

But again, everyone is different.

For example, I can have tea an hour before aerobic exercise and have a lot of energy.

But it makes me nauseous if I’m doing a yoga spin, so if I have a yoga class I need to drink the tea at least 1.5 hours before.

As for whether or not coffee causes dehydration, studies have shown that it is not.

In a 2019 study published in International Journal of Sports Nutrition and MetabolismThe researchers divided the healthy men into three groups and gave them drinks containing four different concentrations of either sucrose (rich in sugar), sodium or caffeine, respectively.

Then they collected the men’s urine production for four hours.

But when they looked at drinks with different amounts of caffeine, the scientists noticed no change in the men’s urine production.

Thus, the researchers concluded that up to 400 mg of caffeine (about four cups) had no effect on the hydration potential, or fluid-retaining ability of the beverage. 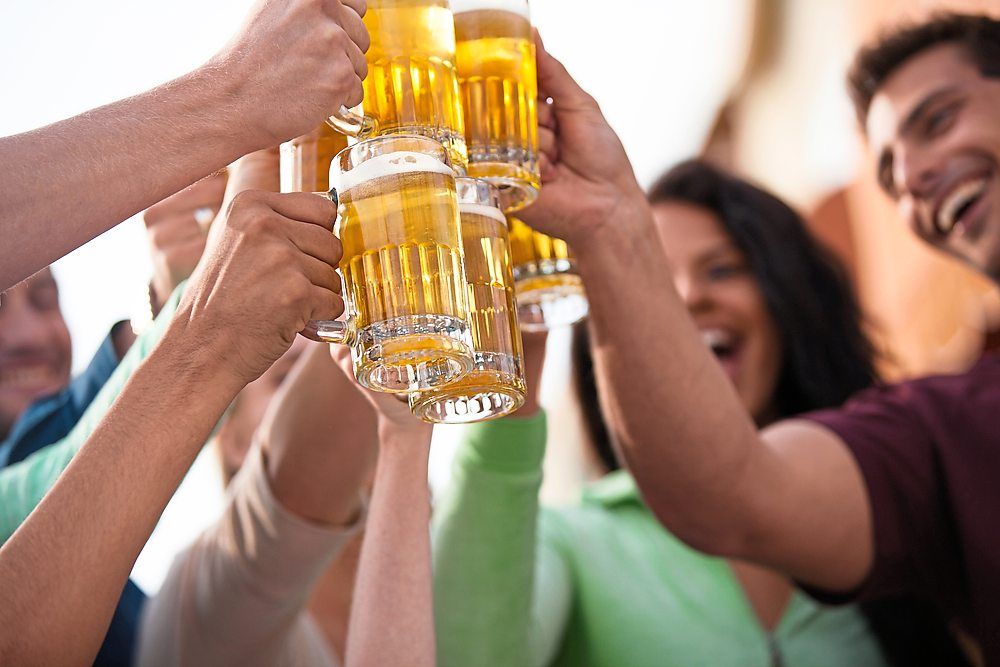 There is nothing wrong with drinking a glass of light beer after a workout because it is as hydrating as water. – France Press agency

Strong wines are strictly prohibited, but drinking beer after a long walk in the sun is the norm for many – it is cold and refreshing.

Some may dismiss the idea, but there’s clearly nothing wrong with drinking a light beer to aid post-workout recovery, and it may be as good as water in some respects.

Beer is made with natural ingredients, including malted grain (often barley), hops, yeast, and water.

Although its alcohol content can vary from less than 1% to more than 15%, a typical beer contains about 5% alcohol by volume.

Based on research on beer consumption related to endurance sports, beer with less than 4% alcohol can be effective as a post-workout moisturizer.

Adding sodium to low-alcohol beer can improve its dehydration properties, but this may not be palatable to some taste buds.

Of course, you shouldn’t have alcohol right before your workout because it will slow down all of your body’s systems.

You may not be able to coordinate between right and left, and you are likely to get injured.

In conclusion, if you’re not a serious athlete, keep flowing and keep drinking plenty of fluids to stay hydrated.

Revathi Murugappan is a certified fitness trainer who tries to fight gravity and continues to dance to express herself artistically and nurture her soul. For more information, send an email to starhealth@thestar.com.my. The information in this column is for general educational purposes only. Neither the star The author makes no warranty as to the accuracy, completeness, functionality, usefulness or other assurances relating to this information. the star The author disclaims liability for any loss, damage to property or personal injury incurred directly or indirectly from reliance on this information.